I’ll never be you,

No need to cure me.

When I was thirteen years old, anxiety overtook my life. It was debilitating and I had numerous panic attacks every day. As I learned more about anxiety, I began to realize that  it’s been with me my whole life, just under the surface waiting to erupt like a volcano.  When I was a child, I was nervous and sensitive and I suffered from chronic health issues with no known cause.  But, the more I learn about anxiety, the more I think that my ‘sicknesses’ were anxiety-related.

What is a Panic Attack?

A panic attack is an uncontrolled reaction to a perceived threat which triggers your body’s fight or flight response. [1]

Your body’s physical response to danger, releasing adrenaline so your body is prepared to defend itself if necessary. [2]

This response is normal and good if the threat is actually dangerous, like being chased or attacked.  However, this response can be misguided, where something not deadly, like, lack of routine, becomes a ‘threat’ that triggers a fight or flight response.  This is anxiety.

When you have a panic attack, your body reacts with a life or death response to a threat that is not actually deadly. Your body can’t tell the difference and will react with a physical response. The source of the anxiety can be a wide variety of things.

For example, but not limited to:

Are these stressful?  Yes, sometimes.   Deadly?  No.

Whatever the trigger is, this fight or flight response causes physical symptoms:

Disclaimer:  If you find that your symptoms aren’t related to an anxiety trigger, go to the doctor. You could have a real health problem that should be treated.

These symptoms of anxiety are scary and send you running after a cure for a symptom rather than looking for the source. You look for a ‘real,’ cause because  it’s hard to admit that it’s all anxiety.  Your brain and body are playing tricks on you and that creates more anxiety.  You feel mental.  You can’t trust your own perceptions.

One time when I was traveling (something that makes me very, very anxious), my family stopped at a motel and I started to have asthma-like symptoms that I now believe were panic-induced.  I know this because my asthma medicine had no effect on my symptoms. My anxiety escalated and so did my symptoms, resulting in a full blown panic attack.

My family turned on the T.V and started flipping through the channels.  We ended up watching The Breakfast Club, and I began to become interested…and guess what?

My death-like symptoms left too.

My vision cleared up, and my breathing became regular.

I was exhausted, but my anxiety left, at least for a time.

If your symptoms can be distracted, then it’s anxiety.

Realizing this fact was a major turning point for me. Anxiety doesn’t receive the kind of sympathy that ‘real’ sicknesses receive, so admitting this is a huge accomplishment. I bucked this fact for a long time, but when I finally did accept it, my anxiety gradually became much less severe. Somehow, knowing this drains the power of the anxiety.

Anxiety creates a vicious cycle. Your brain has incredible memory, so it begins to associate ‘bad’ or ‘dangerous’ situations with certain places or activities.[3]  This can happen anywhere, even your own home or your own bed.

For example, if you have bad dreams at night or can’t sleep, your bed becomes a ‘threat’.  You become afraid to go to bed at night, and procrastinate bedtime because subconsciously, your brain perceives your room as ‘dangerous’.   This is tricky because you might not even realize or see the connection at first. But slowly, stealthily, your anxiety undermines you. Because you start going to bed later, you can’t wake up on time and you’re tired at work. Though it doesn’t seem like it, this is the fight or flight response.  You are fleeing from something that your brain has decided is a ‘danger.’

Another example is this: when you eat, you get acid reflux.  Now, not only food, but mealtime (or even thinking about food) becomes a ‘threat’, and the cycle begins again.  This is no way to live.

Understanding how the fight or flight response works helps to calm myself in the event of another panic attack. I’ll start to struggle to breathe or my vision will blur and I’ll just say  to myself, ‘oh, I’m having anxiety again’ and ignore it.  This way, my symptoms wane and a panic attack is averted.

It’s like a fire.  Without oxygen and burning material, it will fizzle out.   Anxiety only has as much power as you let it have.

Anxiety is a liar. Don’t trust it.

Shove me in your box,

I’m a circle, not a square

Where do I belong? 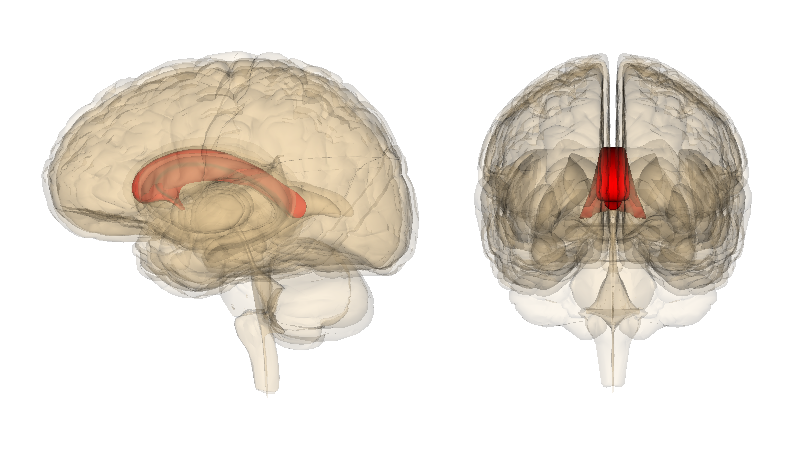 I’ve noticed that all of the issues I struggle with have something in common: a weak corpus callosum.

What is the Corpus Callosum?

It’s the largest connective pathway in the brain. It’s a bundle of nerves located in the middle of the brain that is responsible for communication between the right and left hemispheres.

Why is it important?

Hundreds of daily tasks require the use of this such as: attention, transferring information from one place to another, memorization, multi-tasking, hand-eye coordination, and driving.[1]  As you can see, communication between the two sides is vital to daily living.

As I began to research more about this part of the brain, I was interested to find that all of the following problems are related to a weak corpus callosum[2]:

I realize that all of these disorders are extremely complex and I don’t want to oversimplify them, but I have come to believe that the corpus callosum is a vital piece in the mystery of mental illness. A weak crossover may make one person struggle to read or spell, and another struggle to drive, or judge distances. Because all these symptoms seem unrelated, and vary so much in severity, doctors have come up with different names for each set of symptoms.

Dyslexics struggle to read and spell.

ADHD/ADD means you have attention issues.

The distinction between each disorder is blurred and complicated.  60-70% of people on the autism spectrum also have a learning disability[3], and 25-40% of people with learning disabilities show signs of mental illness[4]. While it remains a mystery what exactly connects these disorders, it seems as if a weak corpus callosum is a factor in all of them.

How can the Corpus Callosum be strengthened?

Gradually, as I strengthen this piece of my brain, I can feel the fog lift. I am better able to express myself through writing and I started playing guitar.  Only a few years ago, I struggled to get my thoughts into a logical piece and I said I’d never play an instrument, but now I am able to do these things.  While I still struggle, I’m getting there.  It’s a process.

These are just my own observations as I try to understand myself.  But whatever you choose to call it, it is a scientific fact that a weak crossover will make you struggle in many different ways. But, I have found hope in the fact that nerves are trainable. Daily brain exercise (crossover activities) and nutrition can significantly strengthen connections in the corpus callosum.  Though I’ll never be ‘normal’ or have a brain that functions as easily as some people, as I strengthen this connection, I’m starting to see glimpses of my brain working more efficiently.

These last two years have been a time of discovery and change for me.  I got diagnosed with a learning disability which has really changed things for me.  I now know why I struggle with certain things and that I am not retarded.  I have a real problem.  I also am eligible for accommodations in college and on the SAT test, which  I’ll take this summer.  Read more about my learning disability here.

I’ve also started going to Alanon which has surprisingly given me strategies not only for dealing with alcoholism, but for for managing my anxiety as well.    I’ve continued to educate myself on my learning problems and the way my mind works.

All this research and real-life practice led me write a blog series about some of the some of the things I’ve discovered about my mind.

Here’s a sneak peek of the topics I’ll cover: